This article about us was posted by the Journal News and then reposted by USA Today!
Please also check out the full video chronicling the whole process!

Yes, it’s real, human blood and, no, it’s not the blood of his vanquished foes.

Jason Fresta, of Ossining, has played guitar and bass in a few bands. He was a bassist for the Days of the New, plays guitar and sings for a band called The Dead Elvi (“Like the plural of Elvis,” he said), and plays bass for the 5th Avenue Vampires dressed in a full-length trench coat, studded-leather hat and frightening face paint.

It’s about theatricality, according to Fresta. For example, at a recent gig in Queens, the band put on gas masks and started up the fog machines, “just to make the crowd uncomfortable.”

“In both bands that I play in, I am in full makeup. It’s very theatrical,” he said.

Fresta had the idea to paint an instrument in blood rolling around for a while, but was beaten to the punch by Gary Holt, guitarist for the band Slayer. So he shifted gears, commissioning what is probably the world’s first bass painted in human blood.

Believe it or not, the story of the blood bass is actually kind of romantic. Fresta met his wife, Stacey Fresta, through her father, Joe Von T, the front-man for the 5th Avenue Vampires. Their blood is now co-mingled on his instrument.

“I always wanted to do something with my and my wife’s blood,” Fresta said.

The first step in the process was to find someone to draw the blood, which according to Fresta is “not as easy as you think.”

“It’s not technically not legal for a phlebotomist to draw blood outside of a medical environment,” he said. “It’s really hard to find someone to do that.”

Next he had to find an artist willing to use blood as a medium. Fresta tapped Ric Frane, who said he preferred not to mix the blood with a thickening agent but to treat the work like a watercolor.

Frane, using blood taken directly from Jason and Stacey Fresta’s veins and transported in a styrofoam beer cooler, painted the bass in an eerie, Vlad the Impaler woodcut and vampire skull motif.

Like the gas masks and fog machines, the purpose of the blood bass is to “make people uncomfortable, make them react,” Fresta said, to “get a reaction out of somebody that they’re not ready for.”

While the blood doesn’t necessarily change the music, Fresta said it does affect how he plays.

“It’s more another element of the theatricality of it,” he said. “I don’t feel as comfortable singing and playing guitar when I’m not in full face paint. It gives me a little more confidence.”

Fresta has a straight job, as it were, managing digital media files for MTV Networks, but he acknowledges that face paint and costumes and blood-covered basses are a part of who he is.

“What I do on stage and how I look on stage, it’s kind of the other side of my persona,” he said.

The phlebotomist — whose identity Fresta kept to himself — took 10 vials of vein claret from the bassist and four more from his wife, but Frane didn’t use that much so there is actually still some blood left over.

“The last time I talked to him he said it was still in his fridge,” Fresta said.

The 5th Avenue Vampires, complete with blood-covered bass, will be at Chiller Theatre, held Oct. 28-30 at the Sheraton Parsippany Hotel, 199 Smith Road in Parsippany, N.J. 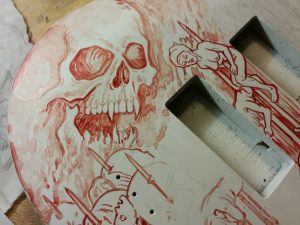 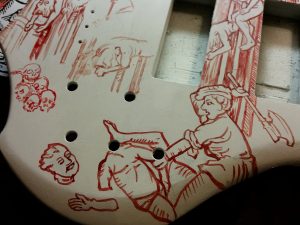 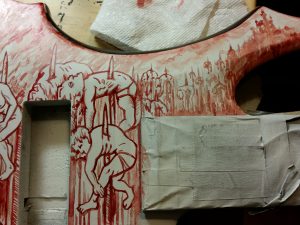 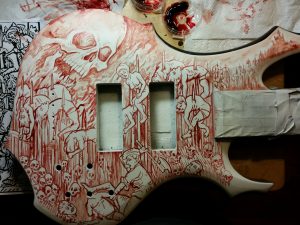 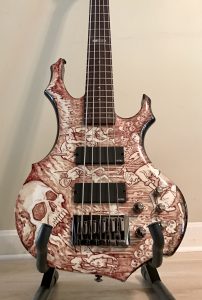 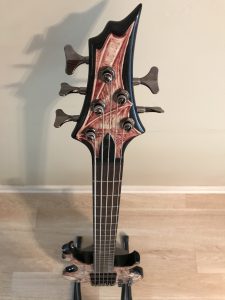 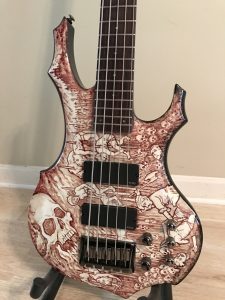